My great great grandfather was George Flew, born in Long Ashton in 1830. He married Mary Ann Martin from Arundel born in 1828. They emigrated to the US in the mid to late 1860s. His brother, William Flew, b. 1826 in Long Ashton, married Anna Maria "A. M." Cook b. 1833 in Bedminster. She stayed in touch with her US kin until her death in Bristol in 1914.
My research indicates that George’s father was William, b 1796 in Long Ashton who married Sarah Watkins, b. 1795 in Tralick, Wales. William’s father was William b. 1752 in Long Ashton married to Ann Davies, b. 1764 in Bristol. His father was also William, b 1730 in Somerset. Possibly he was involved with some tales of sorcery around Mangotsfield and the Lamb Inn incident of 1762.
In addition to Flews, I am also related, through marriage, to Days and Hooks.
I would like to contact anyone that might be related or have information regarding the Flew line. Particularly, a link to the Flews around Portland and in the Devon area.
Thanks in advance,
George Flew
Knoxville, TN, USA

If anybody can help, I will connect with George.

“Hi,
I am also descended from a Lamrock Flower, he married Mary Francis in 1777. The family lived in the manor house next to the church in Saltford. There seems to have been a Lamorock in each generation going back quite a long way.
His daughter Honour married Coster Thompson in 1802 and they are my 3xgreat grandparents. There are a number of Lamrock/Lamorock Thompsons including their son, my 2xgreat grandfather!
Honour was the sister of the (in-)famous Rebecca.
Nick.”

I imagine all you Flower descendants out there are aware of Penny Deverill’s book “Until She Be Dead”, the trial and execution of Rebecca Worlock, nee Flower, for the murder of her husband. Husband murder was considered treason: it was High Treason if committed against the state, Petty Treason if against one’s Lord & Master!  It did not apply if the reverse occurred. 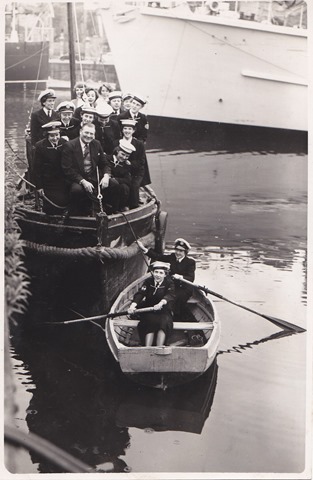 In my youth I was a member of an Organisation called the Girls’ Nautical Training Corps (GNTC), years later amalgamated with the Sea Cadets. We were often mistaken for bona-fide WRNS! We met in Charles Hill’s Dockyard, Bristol,  where our “Ship” was called TS “Lotus”.  We went on parade, learned knots and messed about in boats. I spent a never to be forgotten week on the old training ship “Foudroyant” in Portsmouth Harbour, 1956, when I slept in a hammock.  The little rowing boat pictured here was purchased with funds the Unit raised through jumble sales and the like. Nobody had thought of sponsored walks in those days…… Our CO, Mrs Champion is on the left in the photo. I am in the front, right, on the left side of the gentleman. Was he someone from Hill’s or a Councillor? My name was Doreen Pillinger then. Do you recognise anybody? I can’t remember any of the names. There was another GNTC Unit at Avonmouth with which we joined on occasions, particularly a memorable “Crossing the Line Ceremony” we put on at a fete, where I played “Aphritite, Queen of the Sea, in green seaweed like robes, and everybody got very wet.   Happy Days.

This photo was taken by Mr John Uren the chemist in Downend. My Dad, Jack Pillinger, is the one on the right. Can anybody name the other two? The names Frank and Bill come to mind, but this could be incorrect. Although the press cutting from the Evening Post is dated 1981, the photo is much earlier, in the 1960s I believe. Note the lack of traffic!  Can anyone else remember the Gas Company Hole? Did Mr Uren take any other photos of the Gas Company men who dug it up and filled it again over the years?

Hi,
I see you have a section regarding the Blatchley family. We are collecting all available information about the Blatchley’s in England in order to update/revise and publish a second book about our lineage. If you could pass on anything you have (if any more) and possibly put me in contact with Mr Guy Hirst (if he is still around), I would be grateful.
Thank you very much!
V/R,
Simeon 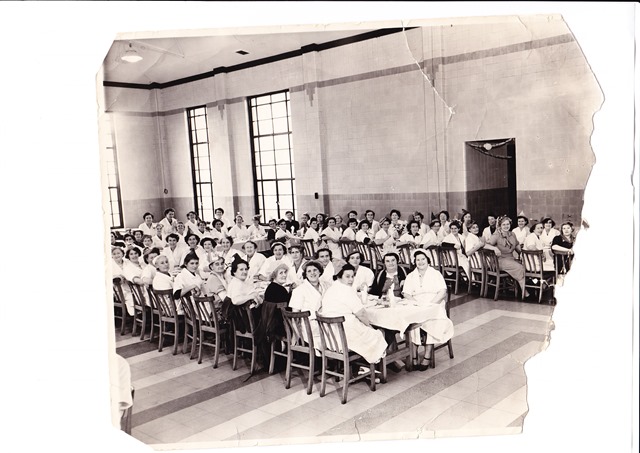 I’d say the date is perhaps a bit earlier. There is what appears to be a Christmas decoration in the doorway at the back. I was going to suggest a W.I Christmas do bur then saw that most of the women are wearing white coats – a factory? too many for a works canteen staff.